Inspired by the Day: the lost art of Derrick Harris – Litro.co.uk (Nov 2015) & Derrick-Harris.com

Pointless Friends: shortlisted for the 2017 Observer/Anthony Burgess prize for Arts Journalism. An essay on the BBC show Pointless.

I Didn’t Actually Invent This Story. An essay on the short stories of Julian Maclaren-Ross – Thresholds: home of the international short story forum

A Memory Box: Man with a Seagull on his Head – Litro.co.uk

A sad tale’s best for winter: a review of Northern Broadsides‘ production of The Winter’s Tale – Humanity Hallows (Oct 2015)

A Short History of Tedium – The Shadow Booth Vol. 1

Through the Flowers – Popshot Illustrated Magazine of New Writing 14

Reviews for World of Trevor. (Reviews for my other work can be found on the News/Blog pages.) 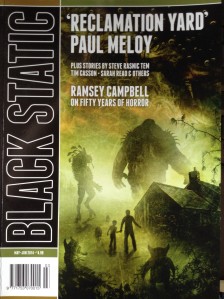 You can buy Black Static number 40 from the good folk at TTA Press here.

“Stephen Hargadon’s ‘World of Trevor‘ steps out of the realm of the fantastical and into the everyday with its story of a local pub-dwelling oddball … Utilising the horror trope of disturbing, ghostly sounds embedded on tape, ‘World of Trevor’ builds at a steadily discomforting pace to a well-delivered punch at the end – Gareth Jones at dreadcentral.com

“World of Trevor” … Our narrator is a barfly talking about another barfly, a man named John Gray who talks to an invisible companion named Trevor. John sells our narrator a cassette tape he says has Beatles music on it. What’s really on it has a profound effect on our narrator, but the story has one more good twist to it at the end  – Sam Tomaino at sfrevu.com

Stephen Hargadon’s “World of Trevor” hit a curious chime, following a protagonist in a circle of habitual drinkers. The oddity of the “regulars” is seen through the eyes of one of their own. The casual crazy is a little less amusing when it starts to suck you in, all to the dulcet tones of Ringo Starr. It hits you, if not where you live, then certainly at the pub round the corner – Matthew Dent at matthewsdent.wordpress.com

Just occasionally, you read a story and you suddenly say ‘yes’ quietly, later you say YES a little louder, but, at the end, you utter a big loud YES … It simply arrays before you a way of life that you recognise, may even have once shared, and the whole thing rolls along … Perfect, as I say. No giveaway spoilers here. The whole thing is a brilliant life spoiler … or even life healer – DF Lewis at dflewisreviews.wordpress.com