You can read and see excerpts from issue 51 here. 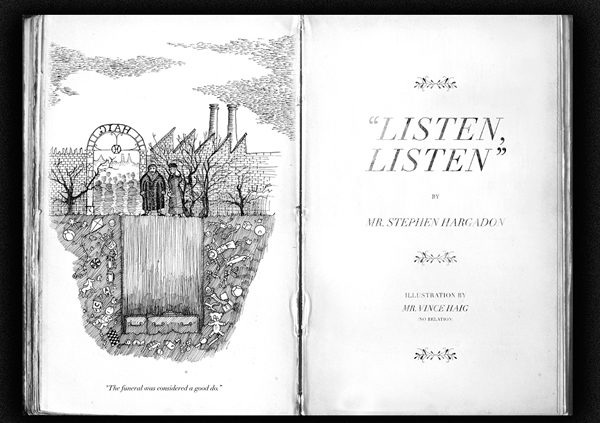 Here’s how the story begins:

“Richard Haig, known to long-standing business acquaintances and certain family members as old Haig, died five weeks ago. On hearing the unhappy news, his eldest son and heir, Robert Haig, had returned from Peterborough where he had been working on his memoirs (two hundred and forty-one pages of rhyming couplets) to attend the funeral, a grand, sombre masque of white blooms and black veils. The whole town came out to smirk. Robert softened himself on gin and swapped polite words with various unremarkable cousins, nephews and simpering admirers of the dearly departed. Resisting the call of Peterborough (where his latest muse, Emily, was waiting for him in a flat above a fish and chip shop), Robert decided to stay on at Haig Heights, an ugly Tudorish pile perched on a hill at the northern end of town. Its timbers creaked and moaned in the cold winds that blew in from Russia. The home, if it can be called a home, had all the charm of a dusty and infrequently visited provincial museum, a certain dull menace, and was efficiently run by a robust housekeeper called Mrs Furnivall. No one knew if this woman was married, or had been married, or wished to be married; it seemed unlikely that she would tolerate something as frivolous in her life as a husband. On the other hand, no one could quite imagine that she had ever been a little Miss, all ribbons and plaits and moonlit intrigues. It was as though Mrs Furnivall had turned Mrs into an entirely new category of being, the mysteries of which were known only to her. While at the Heights, young Haig did his best not to interfere with Mrs Furnivall’s endless round of cleaning and arranging. He retreated to the leathery gloom of the library and set about putting old Haig’s estate in order. But young Haig wasn’t so young anymore and he wasn’t very good at putting things in order. Quite often he abandoned the library for the Cock and Badger, where he found strong ale and a serviceable muse.”

Black Static 51 can be bought here.

Enjoy. And don’t work too hard.